Nothing about Giselle’s appearance gave a clue about the life-altering crisis she was facing. With her sunglasses resting on her head, a sweatshirt wrapped around her hips, and carrying an average sized backpack, she looked as if she was heading on a day trip to the beach. But in reality, this 28-year-old former teacher had just left her home and family in Venezuela and crossed the border into Cúcuta, Colombia in search of food and a future.

Everything she needed for her new life was in her backpack and the plastic bag she carried. While relieved that she had made it out of Venezuela safely, stories of people being robbed by both bandits and the military were commonplace and she knew she still had a long road ahead. Giselle’s next step in her journey was to catch a bus alone to Lima, Peru to join a Venezuelan friend who had recently moved there and gotten a job. This was Giselle’s first time outside of Venezuela, but the journey was necessary as the lack of food for her and her family had become unbearable.

Giselle was just one of thousands of Venezuelans that we witnessed beginning an unsure journey out of desperation. Each day it is estimated that over 30,000 Venezuelans cross this single border crossing into Cúcuta. Many come for the day, just long enough to get a meal or purchase food or receive medical care or medicine before returning in the evening to Venezuela. Others cross into this foreign land hoping to survive and provide for their families by doing menial jobs, such as washing car windows or selling trinkets, while others are forced to take more drastic measures to survive by selling their hair or prostitution. 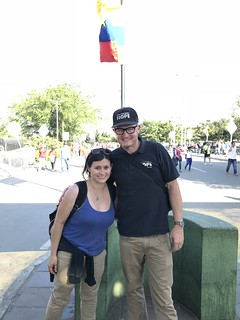 Sean and Giselle at the Venezuela-Colombia border.

The mass crowds that traveled across the bridge between the two countries contained a veritable plethora of humanity. Families with all their belongings piled in a wheelbarrow competed for space with men and women traveling alone across this narrow crossing, sent by their families to find food and possible employment.

Each person we approached shared the same story of desperation over no medical help or food. There were teachers who lost their jobs because students were too hungry to attend school or nurses who were no longer needed as hospitals had run out of medicine and, in some cases, doctors. According to NPR, up to 13,000 doctors have fled the country over the past year. NPR also reports that “The Pharmaceutical Federation of Venezuela estimates the country is suffering from an 85 percent shortage of medicine.”

With over 1 million Venezuelans having already fled the country over the past 2 years under the failed leadership of Nicolas Madura, the refugee influx into neighboring countries such as Colombia is statistically comparable to that of Syrian refugees into Europe in 2015. 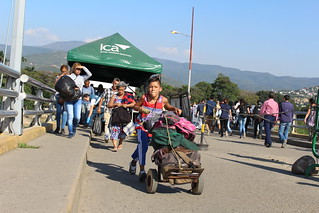 A little boy pushing his family’s belongings across the border.

Since the end of 2016, Giving Children Hope, in partnership with Venezolanos En Kendall and Programa de Ayuda Humanitaria Para Venezuela, has been sending food, nutritional supplements, and medical supplies into Venezuela through neighboring countries.

In March, Giving Children Hope sent a 40-foot shipping container containing almost 350,000 meals to Venezuela. We are also planning on sending supplies such as food, medical resources, and commercial stoves into Colombia to help support the feeding programs provided by our partners in Colombia to Venezuelan refugees.

While the noise of current culture seems to have deafened our ears to the plight of Venezuela, the need is real and urgent. The location of this crisis may seem like a distant problem for others to solve, but the reality is that we CAN make a difference. The stories and pictures that Giving Children Hope has received from Venezuela, sharing that the items we have sent have provided hope and relief, is well worth the effort.

In addition, the crisis is becoming a local one as Giving Children Hope has already seen the growth of Venezuelan refugees here in Orange County participating in our We’ve Got Your Back feeding program. These families are the lucky ones who escaped the hopelessness of their homeland.

Giselle’s story is not unique. Thousands of Venezuelans are leaving the familiarity of their homes in search of food or employment in a foreign and unknown land. Others stay in a dire and life-threatening situation because they can’t leave family behind or physically can’t leave. It is our responsibility to tell their stories and to respond.

Giving Children Hope needs your help. To join us and serve the people of Venezuela, visit www.givingchildrenhope.org/venezuela.